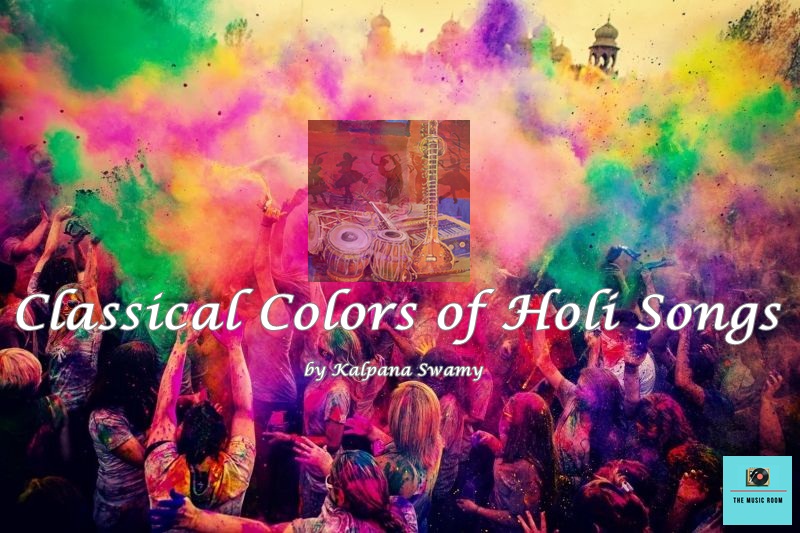 When Gabbar Singh said this on screen, the writers would not have thought that it would become a psalm for the festival of colours in decades to come. Thinking of Holi, a few staple things instantly come to mind like holika-dahan, bhaang, gujia, gulal and of course Rang barse Bheege Chunar Wali…

We get references of Holi in Puranas where Asura king Hiranyakashyapu tried to kill his son, Prahlad, who was a Vishnu bhakt and his sister Holika tried to burn him making him sit on his lap and in return she is burnt to ashes. This is followed by a celebration where people enjoyed with the colours as a mark of victory over evil.

The festival also has a significant association with lord Krishna where the young Radha coloured the dark-skinned Krishna’s face with her favourite colours and hence the couple united and the celebration across Vrindavan began and even today, Holi is celebrated in the most unique way in Mathura and Vrindavan.

Talking of lord Krishna, music and dance play an integral part. Lord Krishna’s Raasleela with Radha and his Gopi’s gets a distinct mention during Holi. In classical singing, Dhamaar is particularly popular for Holi centric songs, with mention of Krishna and Radha or Gopi’s and their frolicking. Traditionally, Dhamaar is a 14 beats taal which was mostly used for Dhrupad and preferably played on pakhawaj. However, with time the Holi specific singing on 14 beat taal and pakhawaj itself got the name of Dhamaar and it formed a distinctive style of its own, which has shades of Dhrupad and Thumri both. Similarly, Holi Thumri is another classical style singing which has found a special place in the celebration of the festival of colours.

Our Hindi film industry is like a pandora’s box, which when asked any question can give relevant references.When we talk of Holi film songs, mostly we remember the songs which are played on dhol in our gatherings and are immensely popular. How about taking a quick detour from the popular numbers and look at some of the melodies, jumbling across decades, which are inspired by the classical thumri’s or folk styles of singing.

Let’s begin with a traditional thumri, sung by none other than everyone’s favourite Madhuri Dixit in the movie Gulaab Gang (2014). The thumri used in the film is an extremely popular number and there are many famous renditions by Shobha Gurtu ji, Kaushiki Chakraborty ji, Malini Awasthi ji and others. In the movie, Madhuri makes an honest attempt to stick to the thumri style with more emphasis on the expressions. She is accompanied by her mother Snehalata Dixit and Anupamaa Raag. The music director Soumik Sen (who is also the director of the movie) has kept the essence of folk intact with dholak and harmonium complementing well. The only ironical element is that the song is clubbed with a wedding sequence instead of a Holi theme.

Moving on, Phalgun or Phagun is the last month of the lunar calendar, the start of which embarks the festival of Holi. This also signifies the change in the season from winter to autumn.No prizes for guessing the next song. The movie I am referring here is the 1973 box-office hit Phagun, which had Holi as a pivotal character to the entire storyline. There was another movie by the same name, released in the year 1958, which was equally famous for its iconic music and of course Madhubala. However, this 1973 film had Holi integrated beautifully in the storyline. The popular Lata Mangeshkar song is composed by S.D.Burman with a folksy touch. Majrooh Sultanpuri saab has used some very north Indian flavours in lyrics with the usage of clean and shudh Hindi. This is one of the quintessential Phagwa songs of Hindi cinema.

Staying on to Phagwa, it would be unfair to not mention the iconic Rajshri films’ Bhojpuri Hindi movie Nadiya Ke Paar (1982). The film had an authentic UP flavour and the veteran music director and lyricist Ravindra Jain gave the honest local taste for Holi or Phaagwa, as called in those parts of the country. In villages, any festival is all about community activities. Almost the entire village would assemble at one place tosing folk songs and dance. Considering the gender sensitive culture, men and woman would have their respective gatherings which also gave them a chance to talk about and tease the opposite gender. A man dressed as a woman wooing the men is not an uncommon site in village gatherings and the same is well depicted in the song Jogi ji dheere dheere.

Lets take a smooth slide from the hardcore folk to folky classical. The movie Godaan (1963) was a village set up movie based on the novel, by the same name, written by the legendary Munshi Premchand, so one would expect an out-an-out folk music and songs in the movie. Interestingly, the classical legend Pt. Ravi Shankar gave music for this movie and it was immensely popular. While the holi sequence song starts with the same line of Jogi ra sa ra rara as Nadiya Ke Paar, the mukhda takes a sharp classical turn with a thumri like song Holi Khelat Nandlal Biraj Me sung by Mohd Rafi. The tune is inspired by a famous thumri Udat Abir Gulal sung by Siddheshwari Devi. Enjoy both the versions back-to-back for the classical and folk touch together like a perfect thandai, with a dash of bhaang, for the Holi.

We spoke about the Radha Krishna connection with Holi. It is a popular belief that Krishna was a dark skinned but extremely charming boy. His skin was dark due to the intake of Putana’s poisonous breast milk. Growing up, he fell in love with Radha who was very fair and that made Krishna very conscious. So when Krishna asks Radha to apply any colour on his face, Radha chose blue. Krishna was very excited but that did not stop him from teasing Radha and he ensured Radha is drenched in every colour possible. Such a vibrant love story. That is the beauty of Radha Krishna love stories.

One classic example of this chhed-chhad is wonderfully explained in the long prelude of the softly rendered song in the voice of Lata Mangeshkar from the movie Durgesh Nandini (1956). Mat Maro Shyaam Pichkari is a beautiful Holi sequence song composed by Hemant Kumar and written with Awadhi flavour by Rajender Krishan. While the song itself is a pleading request from Radha to her Krishna (played by Bina Rai and Pradeep Kumar respectively on screen), the prelude is a long high tone dance sequence with an expansive usage of flute, sitar, tabla and shehnai. The juglabandi among all the strings and percussion instruments gives a feeling of playful banter.

Now lets go to the part two of this jugalbandi. While in the previous song, Radha was pleading Shyam to spare her from bright colours. In the upcoming song, Radha is all set to take revenge from Krishna for his pranks. Same tune in the mukhda and same Raag Pilu as the previous one. But the tone is authoritative. More Kanha jo Aaye Palatke… Ab ke Holi main kheloongi Dat ke! This iconic thumri from the movie Sardari Begum (1996) in the voice of Asha Bhosle (and Arti Ankalikar in another version) sounds like a perfect modern day response to Krishna’s frolicking. A thumri beautifully composed by a senior music director Vanraj Bhatia and written by Javed Akhtar.

Our musical connection with any festival or ritual is very deep. In my humble opinion, Hindi films work like creating a library giving many references, helping people understand the complex subjects with a touch of art and of course making it melodious and lyrical. Hindi film music is indeed one of the most treasured gifts to us, which we must preserve for the generations to come and experience.

There are many unearthed gems, which help us look at a new dimension to probably the songs which we might have listened to multiple times at different occasions. Whether it is folk, pop, contemporary or classical, let the festival of colours immerse you in the your choice of musical emotions.

What is your favourite style of music for the festival of colours? Do let us know in the comment.