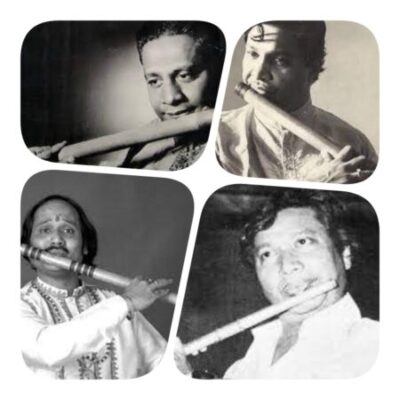 Hindi Film Music is one of the greatest amalgamation of multiple genre of music across world. Since it draws so many flavors of music, it has also merged sounds of many instruments from various corners of continents. Accordion from Austria, Violin from Italy, Guitar and Castanets from Spain and likewise. Among these multi cultural melodic sounds, there is one sound that has enchanted music lovers for decades and that is Flute. The Indian Bamboo Flute or Baansuri dates back to the Mahabharata. This legacy coupled with its some other variations is gloriously carried forward by our Music Composers in Films.

When it came to using Flute in Film Music, the composers have cleverly developed its many applications other than using plain flute sound. Also, apart from Indian Baansuri, English Metalic Flute, Piccolo Flute, Bass Flute etc. have also been used in multiple ways by the arrangers as per the sound requirement in songs. Pt. Pannalal Ghosh, Sumantraj, Manohari Singh, Pt. Hariprasad Chaurasia, Pt. Ronu Mazumdar etc are few flautists that are stalwarts in Hindi Film Music. Among these flautists, Manohari Singh was one musician who had exceptional finesse in playing english metalic flute and Piccolo.

Every composer has used flute in his music in different ways. O.P.Nayyar, Salil Chowdhury, Shankar Jaikishan etc were few composers who used flute extensively in their music. Salil Chowdhury himself was an excellent flautist. Most of his songs have flute as an integral sound. Another genius flautist turned composer who made India proud in flute music is Pt. Hariprasad Chaurasia. In the films for which he composed music along with Pt. Shivkumar Sharma, the use and sound of flute is particularly distinct. These composers used flute for every situation, mood and emotions. It is very interesting to see how a simple instrument has been used so brilliantly with various applications. Lets have look at some songs where we can observe the distinct use of flute.

Who could forget the ever romantic and divine love song from Shree 420 ? This song has become the icon of Hindi Films and its music is now a legend for composers. Shankar Jaikishan had used the Piccolo flute in this song. Piccolo is a short length flute that produces very high pitch sound. In this song, the brief flute piece that Raj Kapoor is playing on screen is played on Piccolo and even though its very brief, it has become an unforgettable music piece for generations.

When it comes to flautists of Hindi Films, name of Pt. Pannalal Ghosh comes in the top league. He was an exponent of Indian Classical Music and excellent flautist. The solo piece of flute in the prelude and all the music pieces in this song are played by him. He was one of the finest flautist of his times in India. Composer duo Shankar Jaikishan had brilliantly used his skilled playing in the film songs.

An interesting experiment that the arrangers and composers have always been doing in film music is to blend the sound of two instruments. This blended sound would give a new flavor to the overall arrangement of song. A commonly used term for such combination is Tutti. In Italian language Tutti simply means combination of two or more sounds. Hindi Film Music Industry has generously used it in colloquial language. One such combination or Tutti is of Flute and Bass Clarinet. High pitch sweet sound of Flute and Bass sound of Clarinet would combine into a delightful harmony. O.P.Nayyar was one such composer who used this sound much often in his music. We can listen to this harmonic sound Tutti of Flute and Clarinet right from prelude in this song.

The english metalic flute is completely different from Indian Baansuri. Unlike holes in the pipe, the english flute has 12 keys on the metalic tube that can generate sound of different notes. Renowned musician and arranger Manohari Singh was a brilliant english flute player apart from being great Saxophonist and Mandolin Player. In this song, the prelude has a solo flute piece of metalic flute played by him.

Laxmikant Pyarelal were one and only music composer duo who started as musicians and rose in the ranks to arranger and finally became music directors. Hence they were deft in selecting right sound for every song and situation. Here in this song, they used Bass Flute for the prelude and interlude pieces keeping in mind the scale and pitch of the song.

When it comes to minimalism in music, the first name that comes to mind is Sachin Dev Burman. He was one composer who had always believed in the power of expressions that could be produced through music. He was never a fan of large orchestral arrangements. Its a sheer delight if there is a song that talks about Basiya i.e. Baansuri as a metaphor for the soul of a beloved. His use of flute in various ways in same song is just splendid. In this song Piya Bina…. apart from solo pieces in bridges and fillers, in first interlude he combined the sound of flute and taar shehnai to depict somber mood. In Second interlude, two flutes are used together in different pitches as a harmonic sound. This way the need for multiple instruments is eliminated. Only a thoughtful composer who believed in the power of melody over instruments could compose such music.

Composing a song for sensuous situation with maintaining a grace and class could be the toughest challenge for any music composer. From composing appropriate tune to getting befitting lyrics written and most importantly selection of instruments for arrangement are the challenges. Rahul Dev Burman or Pancham as he is fondly known had passed this test with flying colors in this song. Just by using few instruments and primarily Indian Flute with intricate pieces , the song was made and had turned out to be one of the finest of all the artists involved including Pancham. Flute in this song was played by Pt. Ronu Mazumdar.

From Krishna Bhajans to Symphony Orchestra, Flute has added sweetness and melody to the lives of music lovers, devotees and musicians for centuries. Its sound and divinity would always inspire composers to make new dimensions out of it.