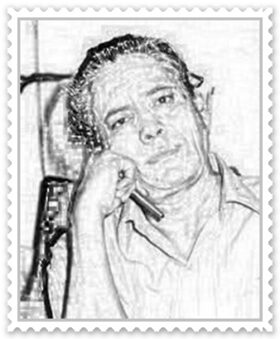 What are songs without words? What are words without HASRAT ?

It was a fanboy moment for me when I got opportunity to write for Hasrat Jaipuri. I was extremely elated and grabbed it with both hands. Afterall, we are celebrating a legend’s life and work.

Hasrat sahab is often tagged as “King of Romance” and undoubtedly there is no one  who has portrayed love so beautifully as him. He has given justice to “Radha & Rukmani” both in his work of romance. But when I dwelled more into his songs, I had to re-calibrate the tag to “King of Emotions” – purely because his songs remained relevant to the emotions of audience across Six decades with as much intensity and purity. It is impossible for almost three to four generations to stay unaffected by the charm of Zindagi ek Safar Hai Suhana or Aaja Sanam Madhur Chandni main Hum or Jiya Bekarar hai or Badan pe sitare lapate hue or Jiya O Jiya kuch bol do or Aao Twist Karein or Dil Ka bhanwar or Hain na bolo bolo or Sama hai suhana….. and the list is endless !!

While Hasrat Jaipuri had been a fine wordsmith of romance, he had another dimension of writing and evoking various other emotions of human nature as well. His huge repertoire of work spanning across four decades has many classics that got overshadowed in the glory of his romantic songs.

So as a tribute to the legend on his 99th birth anniversary, this is a small attempt to introduce his range outside the emotion of love. His takes on life, humour, satire, classical dance forms, festivities etc through his songs.

1956 was the year when The Immoral Traffic (Suppression) Act (SITA) was passed by the Parliament. It prohibited sex trade within 200 yards of public place and termed the act as illegal – supressing the rights of a women to use her body to make a living.Our country was grappling with such social changes post-independence, Hasrat sahab took it upon him to talk about  women empowerment in its truest form. This song was penned in mid-50’s which remains as relevant today as then, or even more.

There were many songs in this era which depicted the depressed & oppressed state of a girl. However, give the baton to Hasrat sahab he turned the outlook into joyful, positive and carefree image of a women – liberating her mind & manner of living.

1959 a year was very historic for Indian cricket. They won their first test against Australia in Kanpur. Maybe they inspired Hasrat sahab to turn romance into humour using cricket terminologies.

Yet to come across a song which comprises of pure cricketing terms like leg break, crease, field etc. This justice to a song could only be possible with a team like SJ, Rafi & Hasrat sahab.

Western music genres like Jazz, Rock n Roll and Blues were always a part of Indian music since early 40’s. However, it gained momentum in the 60’s where not only musically but visually & lyrically attempt were made to get the western dance forms and instruments in the song. Artists of yester-years who were typecast for a genre used this opportunity to break free and set a mark.

This song is landmark as it was early years of Pancham who is credited to bring change in sound post 70’s, Manna Dey who had sung mostly classicial and semi classical was singing this “twisty” number and Hasrat sahab who was known for his shayaris and geets, penned this generation defining anthem.

As the trivia goes, once Shankar ji was at Hasrat sahab’s house and he heard his sister, who was just back from the school, blabber “Ichak Dana Bichak Daana”. This caught attention of melody maker and rest is history. I believe this song is special to era in which it was composed. Literacy levels were at lowest and India needed transformation at grass root levels with regards to education. No better than films and songs to bring that reform.

There were many songs in this decade which mainly taught about the importance of Independence, sacrifices of our  countrymen like Insaaf ki Dagar pe, Aao Bachchon Tumhein Dikhayein etc. This song took the foundation of education in its hands and used riddles to inculcate urge to get literate.

Isnt it still the first song with “e” for our Antakshari rituals.. ? 🙂

This song is a chapter in itself. Hasrat Jaipuri had written in three versions, each one is open to interpretation basis listener’s own upbringing and each one of us will find meaning into it. It is easier said than done. Imagine the soul that Hasrat sahab would have poured to create this magic. It could be one of the finest examples of storytelling which many lyricist in the post 70’s era followed. Lets look at few words of each versions –

It is really an interesting to note that how many professions must Hasrat sahab have covered through his songs. I was sure there would be plethora of these. One very interesting job profile came up was of Insurance Broker or Sales agent. If we go back, this song was written in 1960 and LIC was set up in 1956, symbolizing again how a socially relevant message was taken into a song by Hasrat sahab.

Music of golden era was real epitome of secular India. While interacting with Hasrat sahab’s family, they mentioned that his father made him read holy books of all faiths. Hence his understanding of various culture was supreme. He proved it with two brilliant compositions that he wrote – Murli Bairan from New Delhi (1956) and Banwari Re from Ek Phool Char Kaante (1960).

While writing Krishna bhajans, what emotes your senses is the way names of Krishna is used. In this song, the way Giridhar has been placed shows his deep understanding of Krishna. Who was he when he lifted Giriraj mountain and protected the whole village under his care and love. Lifting of mountain epitomises the one who runs the universe on his fingers and the beings on this galaxy are under his care.

It is indeed a bliss to music and poetry connoisseurs that they could relish the magic of sheer imagination and purity of Hasrat Jaipuri. His work and words will always remain synonymous with golden era of Hindi Films.