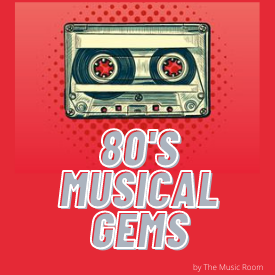 By the time the decade of 70’s was fading out, the world was changing and so was the films and music. Floral designs have started disappearing from fashion. Slimmer bottom trousers had replaced Bell Bottoms. Pre recorded audio cassettes were released along with vinyl records and Disco music had begun getting its foothold in collection of music lovers. The transition from 70’s to 80’s was a major shift in the music compositions too. Since now multi track mixing and electronic systems were available, sound became clearer and more enjoyable.

While so much was happening around, there were changes in cine goers tastes and preferences as well. The typical formulae films of lost and found and revenge oriented crime thrillers have been outlived by more sensitive subjects. Films like Thodi Si Bewafai , Nikah, Ek Duje Ke Liye and Sharabi have paved way to the whole new world of meaningful movies with strong subject and stories. At the same time, a new crop of films like Chashme Baddur, Kathaa, Bazaar, Mirch Masala and Saath Saath introduced a new genre of Parellel Cinema. Film makers like Sai Paranjape, Shyam Benegal , Shashi Kapoor etc have made few beautiful and artistic films.

While the outlook of films and their subjects have changed, they demanded a different kind of music that was more melodious, meaningful and in line with story. Composers like Khayyam and Kuldip Singh had delivered brilliant albums whereas R.D.Burman, Laxmikant Pyarelal and Kalyanji Anandji too shifted their gears and moved over new sound of music. This transition was bliss to music lovers as amidst the high powered disco beats, the soft foot tapping melodies also flown in that regaled them.

Lets relish few of such beautiful songs from the decade of 1980’s. These are some rare, some popular and some undiscovered gems. Once we touch the Play button of the play list, it will definitely take us back to those days.

While 70’s marked the evolution of crime thriller and action oriented films, there were some emotional dramas too that gave audiences a good break from monotony of similar films. Sitara (1980) was one such movie. R.D.Burman and Gulzar did their magic in this film with ever lasting melodies. Thodi Si Zameen… was one of those beauty from this soundtrack. Very much earthen and aspirational melody aptly decorated with Pancham’s brilliant music. The blend of Bass Guitar with Tabla and Madal is something which only he could do. Bhupinder Singh’s deep baritone voice coupled with ever enchanting voice of Lata Mangeshkar is icing on the cake.

Khayyam is known for his soulful melodies and crisp music arrangement. Hazaar Raahen…..is another example of brilliant musical expression of resentful relationship of two loving partners. Guitar riff played in loop along with beautiful Violins score throughout the song makes the composition very soothing. Gulzar in his inimitable way perfectly has described the pain of hearts still longing to get together.

The way Jagjit Singh has revolutionized non filmy Ghazals, Khayyam did the same to filmy Ghazals. He pulled the Ghazals out of classical mold and made them more consumable and musically simple for common listeners. Singers like Sulakshana Pandit, Talat Aziz and Bhupinder Singh were the league who fitted perfect in that scheme. Use of Twelve strings Guitar, Bass Guiar and optimum Violin ensemble in arrangement made Khayyam‘s Ghazals even more enchanting.

Early 80’s saw the rise of a genre called Parallel Cinema. A Cinema which was having more focus on art and story then commercial values. This wave of making meaningful films gave some very good movies with strong subjects such as Bazaar. These kind of subjects necessitated the equally meaningful poetry and appropriate music. Khayyam among others had significantly contributed here. His soulful music with matured approach to the subject put him to much higher pedestal. Phir Chhidi Raat is one of his all time classic composition. A Ghazal beautifully adapted to the needs of film music with controlled use of Strings and dominant Sitars for inducing the literary weight into the melody is brilliant.

With the sense of creative fulfillment and thirst of making films of own choice, actor Shashi Kapoor produced some classic movies under his banner Filmwalla. His films reflected his deep interest in good stories and strong characters. One such beautiful film he made was Vijeta (1982). Apart from a strong story line and striking simplicity, it had lovely music too. Based on Raag Ahir Bhairav , the song Man Anand Anand Chhayo really fills the mind with joy and freshness of dawn. As this Raag is sung in early hours of morning, the song is also aptly shot in early morning as a riyaz of Rekha and beautifully depicts the happy household with serene morning atmosphere.

With every decade the taste and preferences of audience change. By the time 80’s decade had set in, the template of music composing in films also had undergone a change to great extent. Composers like Kuldip Singh had composed some brilliant songs that did not use the standard templates of Strings Obbligato and heavy bass or dominant brass. A simplistic approach made his music more lively. In the song Yeh Tera Ghar Yeh Mera Ghar…he has used very few instruments with very dominant effect. The pacy Dadra Theka with controlled Bass Guitar, Mandolin, Flute and Solo Violins have added the flavors to the soulful lyrics of Javed Akhtar sung by Jagjit Singh and Chitra Singh.

Most successful composer duo of the70’s Laxmikant Pyarelal had also made adaptive changes to their composing and music arrangement style in the 80’s. They drifted away from their usual style of collective sound and dominant rhythm arrangement and composed some soft and minimalist songs such as Mitwa Re Mitwa…..which was sung by Pankaj Udhas. Use of solo Mandolin and Solo Violin along with submissive rhythm and Bhojpuri flavored lyrics by Anand Bakshi was its highlight. The movie is remembered today with this ever melodious composition only.

Many Music Lovers believes that Golden Era of Hindi Film Music ended with early 70’s. However, by end of 70’s and in the 80’s decade many musically and lyrically rich compositions were made by our composers. This article is an attempt to re-discover and shine out such forgotten gems that were lost in the passage of time.