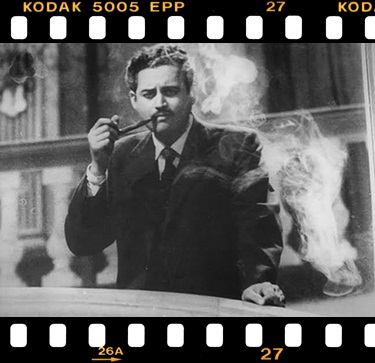 Yeh Khel Hai Kab Se Jaari, Bichhade Sabhi Baari Baari……………Sometimes even poets would have never thought that words written by them will become reality and the artist who immortalize those words on silver screen will eventually live them and die with them. Had Kaifi Azmi known this, he perhaps would not have to write …Rehne ko sadaa dahar mein aata nahin koi ; tum jaise gaye aise bhi jaata nahin koi….

Kagaz Ke Phool was considered to be a film ahead of its time. It was perhaps beyond the boundaries of time. The soul of Kagaz Ke Phool is omnipresent in all times. We have seen so many Suresh Sinha’s rising to the pinnacle and then getting brutally buried into history of forgone era. However, as a film Kagaz ke Phool will always remain close to heart of every sensitive cinema lover. It is said that Guru Dutt had paid homage to his mentor Director Gyan Mukherjee through this film. The fact is that in all respect of film making, it is a text book for a movie maker. A good director is one who can make the audience intrigued for the story of film. A brilliant director is one who takes the audience through thick and thin of his film and leaves a permanent mark on their mind. Needless to say, Guru Dutt was a brilliant director. He makes the characters of film, Sets, Dialogues, Songs and even single shot of camera tell the story of film and yet the audience never realizes it.

The film is all about a Film Director Suresh Sinha (Guru Dutt) who lives a shallow life of Success, Glory and loneliness. He meets Shanti (Wahida Rehman) and finds solace in their natural bonding but they can’t be together as Suresh’s growing up daughter Pammi (Baby Naaz) feels that Shanti will never allow her attempt to bring her estranged parents under one roof. Shanti Promises her to leave Suresh and at the same time Suresh also loses the court case to have custody of his only daughter from his divorced wife. These emotional trauma shatters Suresh and pushes him into alcoholism and oblivion. This brings meteoric fall of Suresh and he is totally destroyed and at last dies in the Directors’ Chair in same studio where he used to make films.

If we look at this way, it’s just another story of success, love, loneliness and self-destruction. But there is something more to it. Suresh’s alcoholism is his resistance to come to terms with reality that he had lost both his love and his daughter. His oblivion is silent cry to the emotional emptiness, loneliness and loss of creativity and love for his craft. It is his abstinence from being parasitic to wealthy studio owners and is expression of his uprightness that comes from pride of being a creative genius.

Let’s look at some highlights of this film’s brilliant creative aspects.

The story begins with first shot when old, fragile and broken Suresh Sinha comes to the Studio of Ajanta Pictures where he used to create magic with his movies and his tale begins in flashback.

The period is of mid 1930’s. This was a time when all artists including director of film and actors used to salaried employees of the Film Production Companies.

Suresh Sinha is a top movie director working for Ajanta Pictures. In only one scene, the director sets the context of Suresh Sinha’s success and stature. Camera takes a moving establishment shot from inside the car which is entering into huge Studio complex. Suresh is sitting in back seat of his 1932 Dodge Convertible Coupe, smoking his pipe and taking every persons’ salute who comes across his way and gets straight into studio. Having expressed to his music director that he doesn’t have time and goes to floor. One scene and Character’s affluent and powerful status is established. Even his Film Company’s owners are afraid of him and discourages their regular heroin to even have a slanting hairline as Suresh doesn’t allow single change in character’s image. Such was his glory and success. He stays in a hill atop sea facing bungalow with a team of servants.

In another scene where Suresh goes to meet his in-laws at Delhi, having visited his daughter Pammi’s boarding school in Dehradoon where he is denied to meet her. Now Here, the director Guru Dutt becomes a bit satirical too. In British India, there were some wealthy families who, despite being Indian, preferred living a lifestyle like Britishers. Suresh’s Father In law is Mr. B.B.Verma and likes to be called ‘Sir’ as the title is conferred upon him by British Government. The Culture of house is also totally anglicized. Even their speaking accent and expression are also British. While talking to Suresh, his mother in law exclaims ‘Oh Dear Me..!!’  in self-pitty. In another scene, Sir B.B. Verma exclaims ‘ Holly Moses’. These phrases were commonly used in English dramas in colonial era. The writers have cleverly used this kind of phrased for the characters of the family which tries to live English life.

Story Telling and Background Music goes hand in hand in a film. What a simple piece of music can do, sometimes a hundred lines of dialogues can’t. It would be sheer injustice to the genius of Film Maker and Music Director if we don’t discuss a specific scene which has a timeless treatment of direction and background music.

In a scene, when Director Suresh Sinha is having conversation with Shanti to convince her to become ‘Paro’ of his film ‘Devdas’,  Shanti very innocently tells him that she is happy with her current salary and doesn’t want to become actor. Suresh tells her that as against her salary of Rs. 90 per month She will get Rs. 1000 per month (….remember is it’s the year 1935), if she works in films. There is no music till this shot. Having known the amount which is ten times her current pay, she is overwhelmed and sits down on floor. A soft flute begins crooning now playing a tune that expresses the feeling of imagination and wondering. Suresh Sinha sits in front of her and asks about her family. Shanti informs that she is orphan and here flute stops and is replaced with a Solo Violin playing a pathos laden tune supported with soft Piano that subtly contradicts the pathos invoked by Violin, with its notes that brings out the feeling of Suresh Sinha that Shanti can become perfect ‘Paro’. She finally gets convinced and Suresh hands over her the dialogues paper. The situation takes turn now and to break the state of sombreness, pathos and confusion, the Music Director used double Glissando (Technique of playing first key to last key on piano in continuation) up and down and Shanti’s journey as an actress begins with full Violins section playing happy tune accompanied by Percussion, Guitar and Double Bass. Background music here has worked like a gold standard catalyst to boost the process of story narration.

Continuing the discussion of the Scene when Suresh Sinha convinces Shanti to become actor in his film, Suresh hands over the dialogues papers to Shanti. Suresh is sitting on Chair and Shanti on floor near his feet having a look at papers. Here the camera takes a backward track short and the close up lights are replaced with background lights leaving only two shadows on set. This visual light and shed effect with backward moving shot establishes that now Shanti is protégé of Suresh Sinha like a Student with her Mentor with a full Violins Sound beginning. A brilliant vision and equally apt execution.

Another Scene, which leaves the impact is when Suresh Sinha goes to his house which is not a home any more. His care enters the property and moves up the ramp. Till this shot, there is a Chorus phrase ‘…Daur Ye Chalta Rahe, Rang Uchchalta Rahe ; Roop Machalta Rahe, Jaam Badalta Rahe…’. The moment Car moves up the ramp Rafi Saab’s voice takes over and brings down the reality to Suresh Sinha with his words ‘..Raat bhar Mehmaa, Hain Baharen Yahan ; Raat gar dhal gayi, phir ye Khushiyan Kaha……’ and Suresh enters his empty house….the Camera takes an angle from far with Curtains freely weaving in the wind depicting emptiness in house. Suresh finds his daughter’s doll and becomes sad and goes to the veranda of house looking at the Sea in front of him. The Song plays in background ‘….arey pal bhar ki khushiyan hain saari ; badhne lagi beqarari…’ and the Camera takes a forward shot on track over the shoulder of Suresh Sinha closing up to Sea, depicting the loneliness and temporary happiness of Suresh that gets consumed by his cruel fate. Scene closes.  An entire sequence of narrative without a single dialogue, just with a background song and Camera movements, makes the audience empathetic with Suresh Sinha.

What makes a movie effective is good expression. These Expressions are acting, dialogues and music. Can we imagine Kagaz Ke Phool without Waqt Ne Kiya Kya Haseen Sitam ? Impossible, isn’t it ? Yes. S.D.Burman had composed a fabulous score for this film. Apart from this immortal song, there are few more lovely songs that are worth mentioning, though not all.

Waqt ne Kiya Kya Haseen Sitam  An eternal poem of two souls that could not be one. The songs begins with an Organ giving cue to Geeta Dutt and she begins the song. Along with vocal a full strings harmony plays to fill in along with a stroke on Triangle on intermittent notes. A double bass plays for subtle rhythm and Spiccato (Playing Violin with bows strokes instead of continual playing) that complements the harmony. Interludes are something that’s really innovative. Usually in Strings arrangement, the Cello and Viola are used for bass sound which moves in complement to high notes on Violins. Here, a tune is played on Cello and Viola and a harmony is composed and played on Violins. A text for musicians. And when the interlude ends, simply mandolin with Vibraphone takes the melody to cue note. The poetry of Kaifi Azmi and Music of S.D.Burman perfectly blends into making an immortal treat.

San San San Woh Chali Hawa… A lovely peppy song on a long drive. Aptly set on simple rhythm of Bongos and solo pieces of Accordion and Flute sets the mood of relaxation and fun. Whistling is another lovely feature of this song. Mehmood is seen in a special Cameo in this song.

Kagaz Ke Phool is said to be the magnum opus of Guru Dutt. He made it to fulfill his creative thirst and the film has become timeless now. Its ironical that the movie had become the reflection of his emotional turmoil and is being identified more as his biographical film. It deserved much more. Guru Dutt deserved much more..!!