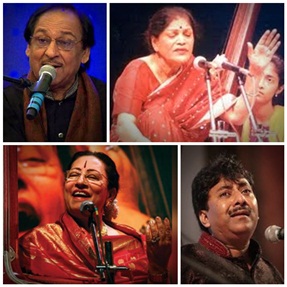 As the connoisseurs of Indian cuisine can’t thank the Awadhi contribution enough for the rich legacy of taste, Music lovers and artists also claim equal share in being grateful to Lucknow for giving them the gift of finest form of expression of love and longing – Thumri.

Thumri is said to have developed as a form of singing during the reign of Nawab Wajid Ali Shah of Awadh. In those days, it used to be sung by courtesans and perhaps that would be the reason of it being focused around delicate emotions. Thumri just like Ghazal is a genre of light classical music and yet a strong outlet of emotional expression too.

Words of Thumri used to be written by anonymous musicians except one that Nawab Wajid Ali Shah himself wrote the heart wrenching Babul Mora Naihar Chhuto Ri Jaye when he was taken to Matia Burj in Calcutta from his beloved Lucknow. However when it comes to rendering them, various prolific singers have performed these Thumri’s and made them immortal such as Ustad Bade Ghulam Ali Khan, Girija Devi, Shobha Gurtu etc.

The droplets of rain have started touching my soul, my beloved, I cant stay without you….as the words of this beautiful Thumri evokes the longing of love. Based on Raag Mishra Pilu and Taal Dadra. Raag Pilu itself is considered to be expression of joy and love and there are many songs created on celebration of festival of colors, Holi from this Raag.

Originally sung by Ustad Bade Ghulam Ali Khan , this beautiful expression of pain of separation was very well rendered in her simplistic and yet gripping way by Thumri Queen late Shobha Gurtu. This thumri was included in the film Prahaar (1991). It is based on Raag Bhinna Shadaj and Taal Keherwa. Yaad Piya Ki Aaye. , Yeh Dukh Saha na Jaaye……is a typical pain of separation and call of love evoking Composition. The voice of Shobha Gurtu feels like piercing the heart with her beautiful rendition.

Which music lover is not aware about this beautiful composition? Yes. Composed by Rahul Dev Burman and sung by Begum Parveen Sultana in the film Kudarat (1980) , this lovely Thumri is based on Raag Bhairavi and Taal Keherwa. An outlet of love by an innocent lover captures the emotions in words Koi Jo Daare Tum Pe Nayanwa, Dekha na Jaye Mose Sajanwa, Jale Mora Manwa….So simple and impeccable. It was written by Majrooh Sultanpuri.

Very Popular and melodious Thumri, originally sung by Ustad Bade Ghulam Ali Khan. Many artists have rendered this beautiful composition with the touch of their style and all of them are delightful. Ustad Rashid Khan has also sung it in his clear and deep voice in such a way that makes listener feel empathetic with the beloved in the song who is waiting for his soul mate. The words in the composition are so delicately painful that can not be described, which goes like Kaaga Sab Tan Khaiyo , Mora Chun Chun Khaiyo maas, Do Naina Mat Khaiyo, Inhe Piya Milan Ki Aas….Aaye na baalam. It is based on Raag Sindhu Bhairavi and Taal Keherwa. The song in the film Swami (1977) had been adapted from this Thumri.

Thumri’s in our Music culture deserve a place equal to Ghazal’s. The rich legacy of eminent classical singers who have sung these Thumri’s will remain immortal as a guiding light to generations of singers.