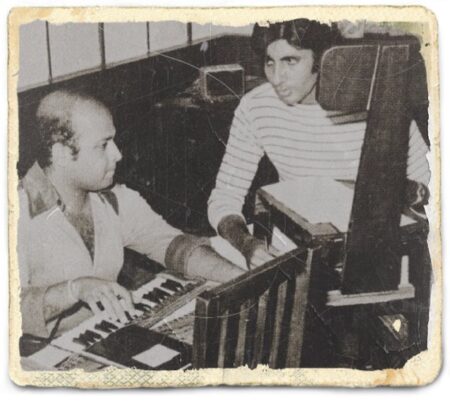 From Anil Biswas to Shankar Jaikishan and from Rahul Dev Burman to A.R.Rehman, the hindi film industry has seen the trend of those composers being successful who charted their own path by not confirming to contemporary trend. Rajesh Roshan is also one of those non conformist music director who made his identity with his own style of composing.

When he began as independent composer after four to five years being under tutelage of Laxmikant Pyarelal (LP), he had choices to make. One, following the trend of making songs that have heavy orchestration, brass oriented westernized flavor and engaging top billable playback singers or Second, creating a music that identifies him as a different composer. He went on to second and made everlasting music.

Being a son of renowned composer has its own flip sides. Audience would have surely expected young Raju to follow the trial of his illustrious father late composer Roshan. Perhaps, his perseverance to compose his own music and different from contemporary trend made his stand and shine out.

Rajesh Roshan‘s work has few peculiar points that were really noteworthy. His had always kept focus on melody, orchestration was complementary. While he trained from the school of Laxmikant Pyarelal whose music was grand and usually of collective sound ( using two instruments in tandem e.g. Guitar and Mandolin or Flute and Clarinet etc) , Rajesh Roshan had mostly used solo or single instrument in music pieces.

Since he himself was a Rhythm player with LP, he developed his own style of playing Conga. His sound of Conga is usually damp and sharp as compared to usual resonating sound.

Optimal Orchestration – no less no more. His songs usually had humble intro music, not a grand one. Harmony on Violins always begun half way the mukhda or sthayi of the song and he had seldom used harmonized strings like LP or Shankar Jaikishan.

His Strings always used to be having sharp monophonic sound like O.P.Nayyar. Coda or end part of the song would always have an instrumental music playing main tune of song. This was a mark of his compositions.

Lets look at some songs he composed which clearly outlined his attempt of creating a different music than usual.

Kishore Kumar has been known for his manly, baritone voice. Rajesh Roshan made use of his soft tonal fiber to compose this song. An intense romantic song where both Rishi Kapoor and Rakhi dances to the song forgetting all their attached strings. It had to be romance d’amour. The song begins with both Kishore Kumar and Lata Mangeshkar singing the first line together – the expression of ‘Aao Manayen..’. Very thoughtful of a composer. A very skillfully played yet damped rhythm on Conga is added flavor.

An absolute scintillating adaptation of Bade Ghulam Ali Khaan’ s thumari Aaye na baalam so beautifully penned by Amit Khanna and equally brilliantly composed by Rajesh Roshan. While the song plays role of background on which the story is running, its challenging for composer to capture the expression of joy and pathos at the same time. Rajesh Roshan did it flawlessly. He used flute for bridges and interludes using it for conveying joy (bridge notes after first line ‘Kaa karu…..) and sadness (Second interlude). while he used twelve string guitar for the interlude pieces for joyful expression, use of Sarod and Taar Shehnai balances it with the somber mood of Shabana Azmi. An over all brilliant work to complement the film.

As a composer, he has always highlighted the use of percussion in the same level of main rhythm, something which Pancham also did. This song is a testimony of how a composer can think differently. First, the rhythm which is basically waltz is played on drum kick and Cabasa in 1-2-3 pattern. Secondly, the entry of strings. This has always been his signature style. Soft and Subtle entry of violins with short passages in background of main melody is distinctively him. Third, the coda or ending piece of song played on main tune repeatedly – humming by singer and Spiccato on violins.

Credit of composing first playback in his own voice from Amitabh Bachchan also goes to Rajesh Roshan. Beautifully crafted a story teller song is soft and soothing composition, written like a children’s poem by Anand Bakshi . To maintain the flavor of children’s song, the orchestration is kept minimal. Only Acoustic Guitar, Bongo , Piano and few soft strings pieces and special sound effects have been used to make this wonderful composition.

A brilliant and under rated composition from the film Papa Kehte Hain. A loving father advising his daughter about the worldly challenges and faith in herself. Most beautifully articulated by Javed Akhtar. Aao Ek Baat Main Kahun Tumse, Chahe Phir Koi yeh Kahe Na Kahe ; Tumko Apni Talash Karni Hai, Humsafar Koi bhi Rahe na Rahe….this line sums it up all. Equally brilliantly composed with Soft Strings, Piano and Sax pieces. Rhythm , though in the meter of four by four, is brilliantly played in waltzy style on drums and conga. In Second interlude there is a short piece of Saxophone with Indian keherwa theka on Dholak and again the regular rhythm resumes. This was also a distinct feature of Rajesh Roshan’s style. Many Songs like Ek Raasta Hai Zindagi, Mere Dil Mein Jo Hota Hai etc have this kind of pieces.

Rajesh Roshan has given the music lovers many melodious and everlasting songs and for which fans of hindi film music will always remember him.