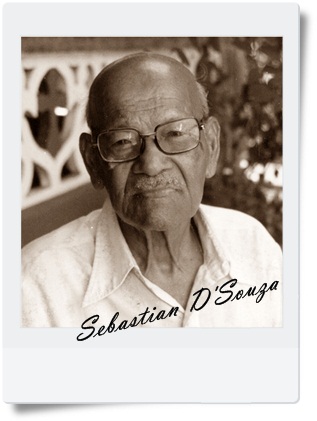 One of the most significant contributions of the Portuguese in India was compulsory music learning in Church Schools. They would not have imagined that this policy will be immensely helpful to composers of Hindi Film Music. How could this happen ? To know the answer, lets go 115 years back. On 29th January 1906, a baby was born in Reis-Megos village in North Goa. His parents named him Sebastian. From childhood days, Sebastian D’souza learnt playing Violin and Piano as a part of curriculum of local Church School. He also learnt writing music notations. When he grew up, he began playing music and soon became band leader in the hotels in Allahabad, Massoorie, Delhi and finally in Lahore. Here in Lahore, he became friend of O.P.Nayyar. Post independence he moved to Bombay and got his first assignment with O.P.Nayyar with film Kaneez (1949) for its background score. When he became independent composer for Aasmaan (1952), Sebastian D’souza became his arranger. This was beginning of his glorious career of 23 years as music arranger.

Music Arranger’s job is to execute the vision of Composer for the particular song. While the system and methods of music arrangement in Hindi films were developed by legendary arranger and musician Anthony Gonsalves, it was brilliantly utilized and taken to next level by Sebastian D’souza. He was deft at western classical music as well as at understanding the Indian classical music. It is said that he could write the music notations along side the composers’ narration of tunes. Also, he could convert the nuances of Indian classical music into staff notations and make it easier for musicians to play by the book.

Sebastian D’souza’s most noteworthy contribution in film music was composing and popularizing the harmonies or counter melodies. He was a music genius who could compose strings obbligatos, fillers, bridges and cadences with great creativity. Also, he could seamlessly blend Western and Indian instruments. Apart from arranging music for films, he also arranged music for eleven tracks of a fusion album Raaga Jazz Style (1968) which was composed by Shankar Jaikishan. In this album, he converged the Indian Classical Raaga based melodies with Jazz Music and created fusion music.

While he was gifted arranger and musician and worked extensively with many composers like Shankar Jaikishan, O.P.Nayyar, Salil Chowdhury etc, he always coincided his work with the style of composer he worked with. He never tried to leave his mark as his identity. It would be very interesting to explore his work through some selected songs that he arranged.

Sebastian D’souza’s first film as an arranger with Shankar Jaikishan was Daag (1952). He designed beautiful counter melody in this song which was played on Harmonium by V. Bulsara. This counter melody is considered as benchmark among musicians today. Apart from it, the strings obbligato and fillers on Mandolin are also designed in perfect harmony to the main melody.

Shankar Jaikishan gained immense success as composers and Sebastian D’souza’s contribution in it was critical. This iconic song can be used as a case study for the Strings or Violins obbligatos. Entire composition is having rich background Violins harmony which runs alongside the vocals and create magical impact with its melodic complements.

Mud Mud Ke Na Dekh is perhaps one of the earliest compositions which showed what arranger could do to enrich the melody. An ever enchanting melody of Shankar Jaikishan was perfectly decorated with brilliant music by Sebastian. Song begins with Waltz beats and once the tempo picks up, it seamlessly transitions to 4/4 beats. Amazing convergence of two different rhythms in one song. Also, the music piece which catapults the tempo of song from slow waltzy dance to a pacy foot tapper is another piece of art. Typically this kind of piece are composed with brass instruments ensemble due to their loud sound timber but in mid 50’s except Trumpets and Saxophone, other brass instruments were not much used in film music. Sebastian D’souza had built the sound mix with Trumpets, Clarinet, Accordion and Violins. It had a magnanimous impact on changing the whole mood of the song.

Can anyone imagine this song without its Accordion pieces ? The answer is No. That’s the testimony of Sebatian D’souza’s creativity. He beautifully created fillers, bridges and even interlude music pieces on Accordion and woven so seamlessly with O.P.Nayyar‘s immortal melody.

O.P.Nayyar has publicly acknowledged the contribution of Sebastian D’souza in his work. This song is a perfect example of how Sebastian could arrange the music keeping in view the style of composer. Since O.P.Nayyar was fond of using Sarangi in his songs, Sebastian harmonized the Sarangi’s thin sound with bass sound of Cello and the results was outstanding. Also, the clip clop Tonga beats were supported with Contra Bass so that it can be a solid supporting rhythm sound. Since O.P.Nayyar never liked to harmonize his Strings or Violins in multiple octaves, Sebastian kept the single tone of the entire Strings section and still beautifully managed to keep it soothing to ears. A classic sound design example.

Any music listener or O.P.Nayyar fan would never deny the magic of those Accordion counters playing in the background of intoxicating singing of Asha Bhosle. This counter melody was creativity of Sebastian D’souza. Apart from the counters, the classic Rhythm Guitar scores and Saxophone Solo were another noteworthy highlights of this song that enhanced its beauty.

Anand (1971) was among the last spell of Sebastian D’Souza‘s 23 years long career in film industry. He worked with Salil Chowdhary in his many films. Since Salil da was a great aficionado of Western Classical Music, Sebastian would have been perfect choice for him as an arranger who had a great command over Western Music Theory. Much to the preference and choice of composer, Sebastian used Choral Harmony extensively in this song apart from solo Trumpet pieces in prelude and interludes. Simple and elegant composition with rich orchestration was forte of Sebastian D’souza.

Sebastian D’souza arranged for over 1000 plus songs in around 125 films. His harmony patterns and scores have remained handy reference for musicians arrangers and composers. He left film industry in 1975 and settled in his native in Goa where he peacefully passed in 1996 leaving behind rich legacy of his music.