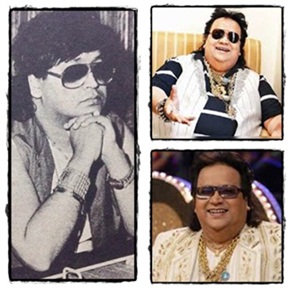 Young Alokesh was really a chip off the old block. He began learning Tabla at the tender age of three and went on to train himself in various aspects of Music from his classical musician and singer parents Bansuri and Aparesh Lahiri. He became composer at the age of nineteen with Bengali Cinema. Later, when he began putting his feet on the glossy film world of Bombay in 1973, he became popular as Bappi Lahiri.

His critiques would also have conceded that he has always composed soulful melodies. Every successful composer had to follow the contemporary trend in songs. The commercial pressure would always supersede the creativity but those who could innovate under pressure have made their mark. Bappi Lahiri has made his trail with his inimitable style.

70’s musically rich compositions or 80’s disco centric songs, Bappi Lahiri had maintained the core melody. Balanced bass line with trendy rhythm and instrument rich orchestration has been his style. On one hand he worked extensively with legendary Kishore Kumar, Lata Mangeshkar and Asha Bhosle and on the other hand he gave opportunity to singers like Vijay Benedict, Sharon Prabhakar, Anupama Deshpande etc. Songs that he sang in his own voice and style are totally a separate repertoire to explore.

Let’s look at some of his selected compositions with their highlights to understand and enjoy Bappi da’s music in better way.

Chalte Chalte marked his arrival loud in Hindi Film Music. This song is a wonderful example of creative rhythm arrangement. Tempo of the song is pacy and set on 3/4 beats but in antra it shifts to Keherwa theka i.e. 4/4 beats and again moves back to original 3/4 beats in mukhda. Vibrant strings and strokes (Guitars) arrangement renders the mood of outdoor romance.

One of Kishore Kumar’s under rated and lovely song. Even though the mood is of fun and romance and there was quite liberty to stuff the composition with instruments, the arrangement is kept absolutely simple with lovely Strings score and Saxophone interludes. Spot light is on its rhythm. The beats are 4/4 but played like Indian Keherwa theka on Conga. It sounds like played on Dholak.

A song of romance and gracefully depicted sensuality. Kishore Kumar’s soft and controlled singing adds the sensuous feel in the composition. The remarkably minimal arrangement with simple rhythm on Tabla , rhythm Guitars, dominant Xylophone strokes and quite essential melody on Saxophone makes the melody elegant.

Inspired from Dr Hook’s When you are in love with beautiful woman, this song had improvisation in terms of addition of lovely strings score, the tune of antra and insertion of cross line in the voice of Bappi da himself. The Bass line and Electric Guitars score are equally in sync of pacy melody.

As the name of the film suggests, the composition had to be an electrifying dance number. Apart from having a melody expressing lot of emotions on foot tapping beats, an ear catcher was its strings score. The harmony on strings i.e. violins in the background of this disco song is beautifully crafted and synchronized. Sung by Bappi da himself, its been favorite among his fans ever since it was released.