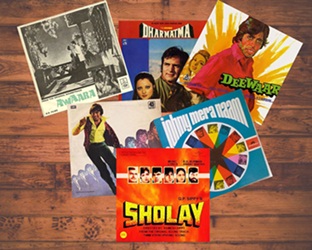 From folklore to plays and musical drama to films, story telling has changed many forms over a century. Every time the narrators have tried to make their story more and more intriguing to audiences. When the stage dramas have given way to films or motion pictures, especially talkies, a dilemma arose – how to begin the story ? This is when the Title Music of Films was born.

We have our films of early 40’s also rolling the title credits with music in the background. Initially this was just a vehicle to carry the title credits and had no or insignificant connection to story of film. By late 40’s and early 50’s film makers and composers have started using instrumental tunes of songs of films in continual melody as a title music. This served purpose of intriguing audience to listen to songs also. Credit of this experiment goes to the trend setters Shankar Jaikishan. They not only popularized the trend of songs based title music but also overhauled the way background music was composed.

In 1962 an English film was released which created a new genre of films and completely changed the way thriller movies were made. It was Ian Flaming’s Spy character James Bond’s first film Dr No. It had deeply influenced makers of Hindi films too. Films have begun getting produced in James Bond mold and have opened new chapter in Title music also. Theme music have started getting composed and used in title tracks. These theme music had all elements of story – suspense, romance, music and thrill. With brass instruments, electric and bass guitars and African conga and tumba getting popular in orchestra, title music have also these elements to enunciate the required moods.

Composers like R.D.Burman, Kalyanji Anandji, Babla, Laxmikant Pyarelal etc have successfully composed theme based title tracks. These tracks had become so popular that they have found their position amidst songs of film on the Vinyl Records and Audio Cassettes.

Let’s listen to the compilation of such six brilliantly composed Title Tracks which have lured music lovers ever since the films have released.

Eventually, Title Songs in background have also started getting used to begin the story right from first credit on screen. However, the charm of Instrumental Tracks have always fascinated the music lovers.