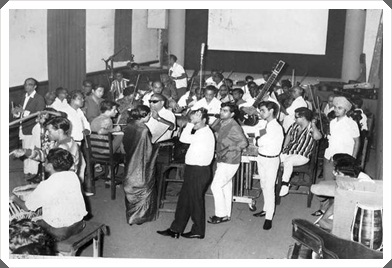 Ever wondered if there won’t be pickle in a meal how it would taste ? or if there won’t be any perfume along with attire, would it be complete ? Perhaps No. Similarly in orchestra too, there are instruments which , though sound insignificant when played alone, perfectly complement the overall sound design when played in harmony. These are percussion instruments — especially melodic one.

Melodic Percussion Instruments, technically of the same family, still are used variably for different moods. These instruments are mainly Xylophone, Vibraphone and Glockenspiel. They are essentially of the family of Jal Tarang kind of instruments which generate a sweet and staccato sound when played. Since they are played with a short wooden sticks called Mallet, they are called Mallet family instruments. Mainly they differ in terms of resonance and shrillness of sound.

These instruments have been used in our Hindi Film Music for over sixty years for songs as well as background scores.

Lets have look at few songs wherein these instruments are distinctly used along with some details of instruments to know more about them and appreciate better.

Xylophone is having wooden bars and have cylindrical pipes below each bar with specific length to generate required sound when played. Its an idiophone that generates sound by vibrating. Its sound pitch is lower and is usually tuned chromatically.

Let’s look at some songs with Xylophone’s distinct use.

In order to signify the Japanese culture and its musical flavor, Xylophone is used in this song and played to a specific tune that sounds like a local Japanese tune. Xylophone perfectly fitted this arrangement as its origins was in South East Asia only.

Beautiful melody from the film Man Pasand. Dev Anand seems teaching correct notes of the song to Tina Munim with the help of Xylophone. The tune of Charu Chandra ki Chanchal Chitwan is played on Xylophone. Perhaps it would be only song wherein Xylophone is seen being played live.

Unlike Xylophone, Vibraphone has metallic bars and have a resonator tubes below each bar. It also has a motor which produces continuous tremolo and generates resonating sound when each bar is played with a mallet. Its usually played with two or four mallets together. It also has a sustain pedal which can be used to sustain or mute a note when played. The sound of it is in a mid – high register.

Lets look at some Vibraphone based songs.

One of the last songs of Geeta Dutt. This song has two versions. The film version has only one instrument accompanying singer and that is Vibraphone. Vinyl version has a muted rhythm too. Vibraphone complements the singer and though remains subtle. That’s the beauty of its sound.

There can not be a song more romantic than a soft melody with minimal instruments. Arrangement of this brilliant composition had handful of instruments. Rhythm on Double Bass with subtle Majeera and Prominent Vibraphone, harmony on suspended Violins and Interludes on blended sound of Flute and Saarangi. Voice of Hemant Kumar and Lata Mangeshkar makes it divine.

A smaller in size than other two instruments mentioned above, Glockenspiel has Keyboard type arranged metallic bars. Its sound is in a higher register. It has usually two and a half octave notes on its bars. It is also played with hard mallets.

The first song in which Glockenspiel was played in Hindi Films. It was played by Kersi Lord. With brilliant harmonizing strings on same tune, staccato notes played on Glockenspiel on the tune of song creates an impact of relaxed and carefree mood of Dev Anand.

Another delectable melody from the film Mamta. Glock was the favorite instrument of Composer Roshan. He used it in his many songs. This song Rahe Na Rahe Hum begins itself with notes on Glock and through out the composition it keeps complementing the melody.

All the three instruments are basically percussion instruments but its player must know the melody and theory of harmony and chords. Our Composers and Musicians have used them deftly in songs and background scores with their immaculate sense of cinema and music.