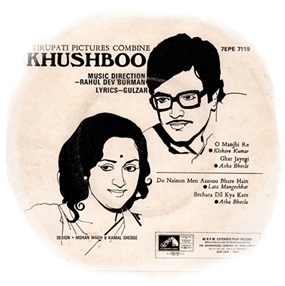 Yaar Kuchh Karte Hain……...this used to be the skull mark line of Pancham whenever he wanted to experiment something different in his compositions and if the poetry of Gulzar is added to his zeal, it becomes treat to ears.

Let’s talk about such song which came from creative combines of these two genius. Its a song of a loving complaint of a playful heart. Bechara Dil Kya Kare, Sawan Jale, Bhado Jale. Poor Heart is burning even there is a scorching heat and even there is a free flowing rain. What a beautiful way of conveying emotions of a girl for her beloved. Do Pal Ki Raah Nahin, Ek Pal Chale Ek Pal Ruke . Anxiety of longing heart is tireless and not letting it rest. Gulzar had this earthen flavor in his work which connects audience to vision of creator.

His pen flows further. Gaaon Gaaon mein ghume re jogi , rogi change kare, Mere liye hi man ka taap na jane, haath na dhare Her beau is a doctor. She complains playfully that he treats people in every nook and corner but does not care for her ill soul which wants his love. In Second antra he writes Tere vaaste laakho raaste, tu jahan bhi chale, Mere liye hain teri hi raahen, tu jo saath le There is a surrender in love here. He can go anywhere do anything. She is willing to be his shadow and part of his life, if he accepts her. Gulzar has poured the emotions of love and longing beautifully on paper.

What better a composer can do with a song getting picturised in rural settings with two actresses and a small boy moving around with a pot in hand ? But then comes the creativity of composer comes to play which aptly catalyses the job of director.

The song as its on a lighter note and in happier mood, did require a pacy meter. Pancham sets the song is pacy Keherwa theka for rhythm with very much earthen feel in orchestration.

Here most important is prominent use of Sitar. During the entire composition, Sitar is played in tandem with Jal Tarang. The skillful arrangement catches the attention. Sweet resonating sound of Jal Tarang combined with Sitar strokes evoke the feeling of happy mood.

The song begins with the Jhala played in the prelude from 0.14 to 0.18 seconds. Jhala is a technique of playing one bass and three melody strings of Sitar in very fast pace. It requires tremendous control over instrument to play Jhala with rhythm.

The singing is icing on the cake. Ashaji beautifully pumps the soul in the poerty and music. Her little harkat at the end of each antra ….hmm hm hmm which ends with two strokes of Guitar and Sitar adds the much require playfulness in the composition.

This song remains an eternal classic for its beautiful Poetry, treatment and simplicity.