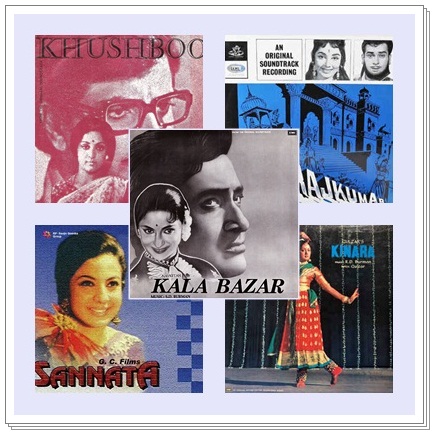 You have to learn the rules of the game. And then you have to play better than anyone else, as Albert Einstein said. Few of our composers have actually did it and proved that by defying conventional methods, a better composition can be made.

Hindi Film Songs of last seven decades is a huge repertoire of various kind of musical innovations. Some are subtle and some are very strange. All of them have shown that how differently a composer can think and create.

Let’s look at few of such songs that were composed either by totally different than usual style of composer himself or with some thoughtful change in orchestration. They gave us a new perspective to look at Hindi film music.

Since early 40’s when music direction had started taking shape in cinema, most of the composers had followed one formula to compose songs which were shot in a moving vehicles such as train or tanga. They used the sound of that vehicle as a rhythm. For example, for train song, invariably a fast beat rhythm pattern or for a ghoda gadi song, typical tik tok tik tok beats were used. Reason was obvious. It aligned perfectly with situation and melody. But there was one composer who didn’t follow the rule. He was S.D.Burman. When a situation came to him wherein the hero is singing song in a running train to woo his crush, he composed a song on a 14 beats rhythm i.e. Rupak Taal (Same beats of Piya Tose Naia Lage Re). This was never done before. How can 14 beats cycle synchronize with visuals of moving train ? Conventionally it could have been either 2/4 or 4/4 beat (Taal Keherwa). But it was Dada Burman. He composed it and it has remained classic since then.

Shankar Jaikishan (SJ) have been trend setter composers. They were known for their large orchestral setting and a big violin section with 30 to 50 violinists. As the trivia goes, while they were making music of Rajkumar, someone challenged them that they cant compose a song without strings or violins. SJ took up the challenge and thus was born the iconic song – Dilruba Dil Pe Tu…….. SJ simply used Bongo and Rhythm Guitars for rhythm and Lead Guitar for melody. No large orchestra, no violins. Asha Bhosle and Rafi have also proved that a good singer is never dependent on accompanying instruments.

Can a song be taken as it is from music rehearsal to final recording in studio without any music arrangement ? Answer is yes. Hemant Kumar did it twice. Earlier in his film Inspector (1956) , he composed song ‘Dil Chhed Koi Aisa Naghma’ with just Harmonium and Tabla. Later, in this film Sannata (1966) also, he repeated the style and it worked. Even though the film was not so successful, the lovely song written by Gulzar and sung by Hemant Kumar himself, has remained favorite among music lovers.

When heart broken Kusum grieves in the mid of night, the pain of her heart flows in the form of a song. It was a dark night and she was crying. The composer had to think differently. Pancham did think differently. He only used Vibraphone with Lata Mangeshkar’s voice. Another famous song in same pattern is Mujhe Jaan Na Kaho from the film Anubhav (1971). Beauty of both songs is that there is no harmony or rhythm. Just soft sound of Vibraphone to fill the pauses. Hates off to singers as they rendered the song perfectly without any cue notes or rhythm timings.

Chitthi hai ya Kavita ? asks Chandan to his beloved Aarti and indeed its difficult for listeners also to decide whether its a song or a poem or a musical conversation. Pancham brilliantly composed a musical flow in the deep baritone voice of Bhupinder Singh, on the poetry of Gulzar. A sheer melody with just a Lead Guitar accompaniment and occasional beats on Duggi. One of the most amazing composition of R.D.Burman over his so many musical gems.

All these and many other songs shows how the composers used to work so much on each song and create something brilliant. Such Compositions also inspires artists to develop lateral thinking in their work.