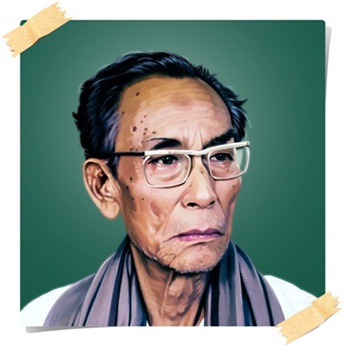 An avid sportsman, A Music Teacher, A Drupad Singer, A Prince and A Composer – Sachin Dev Burman wore many hats while he finally landed that of a composer on his head. Even though he never went to be part of his royal family in Tripura, his conduct and stature as a music composer in Kolkata and Bombay have always been like a prince. Dada Burman or Karta as he was fondly known, S.D.Burman’s work as a composer spanning for over fourty years is very interesting. Let’s have a look at few aspects of his work as a composer in hindi films –

S.D.Burman had seen the changing times and tastes of cine goers for music from 1944 to 1974 but his conviction as a composer remained rock solid for supremacy of melody. He had a strange and perfectly logical way of testing his tunes for acceptability of public. When he composed a new tune, he would hum it to his house help or driver or gardener and would ask their feedback. Logic was simple. If the men from most humble section of society would like it, the tune will definitely be popular. Now we can say that these test did give precise results !!

He had composed all his songs with utter simplicity in tunes. Short phrases, small and melodic passages and uncluttered interludes was his signature style to make a song. Let’s take an example of one such song.

Once during a recording of a song, Dada Burman had asked his assistants to get eleven violinists for strings section. After the orchestra arrangement was done, when he arrived in studio, he got furious to see twelve violinists instead of eleven. He asked the assistant to pay to the additional musician and ask him to leave. Such was his insistence to have optimum number of musicians – not more not less. He had created required sound from sufficient instruments and made the popular music, instead of getting carried away with the trend of large orchestra of that time.

The technique of getting required loudness at appropriate place in arrangement with the help of few musicians and maintain the softness of melody was something that he was a master of. This song is a testimony of his this trait. The sound of violins depicts the skilled arrangement and stamp of S.D.Burman on it.

While Pancham is known for his experiments in rhythm across music lovers of hindi films, he seemed to have inherited this trait from his illustrious father Kumar Sachin Dev Burman. Every composition needs a different rhythmic treatment. This was the principle which he had followed in his musical career. Even if the basic theka is Dadra , he would innovate it with some kind of twist that would make the song sound different. For example, Khilte Hain Gul Yahan which had a thapki in dadra theka or Jalte Hain Jiske Liye which is originally six beats or dadra theka rhythm but he simply used Matka, Piano, Rhythm Guitar and Percussion to get required soft beats on same meter .

Here is one such song which had a uniquely crafted rhythm on conga drums. It is basically eight beats rhythm or Keherwa Theka.

While every composer would have his favorite raag or taal which he would love to use given an opportunity, S.D.Burman had a soft corner for a much under utilized Taal Rupak. Very few composers have used it. It is basically a seven beats taal with following bol or sound –

To compose a song over Rupak is relatively a difficult task as the melodic phrases of tune has to be lengthy enough to let the seven beats cycle of rupak finished, yet it should not lose out its melodic punch. A skilled music composer can achieve this task and make a good song. Here, this was a favorite taal of S.D.Burman. This itself testifies his caliber. He composed eight songs in Rupak. These were Ab ke Baras Bhejo (Bandini), Kahin Bekhayal Hokar (Teen Deviyan), Apni to Har Aah (Kaala Bazar), Mehbooba Teri Tasveer (Ishq par Zor Nahin), Piya Tose Naina Lage Re (Guide), Megha Chhaye Aadhi Raat (Sharmilee), Teri Bindiya Re & Tere Mere Milan Ki Yeh Raina (Abhimaan)

While it has happened with most of composers that they would have formed the comfortable equations with lyricists or arrangers or their selected assistants and have delivered brilliant compositions when worked with them. But when this equation broke and they had to team up with other artists, many composers had not been able to generate that spark. Also, almost every composer had a downfall in their career’s last phase except one – Sachin Dev Burman.

He had worked with almost all lyricists of his time starting from Sahir to Anand Bakshi. If we list out his assistants, it would be a surprising detail – Suhrid Kar, Madan Mohan, Jaidev, R.D.Burman, Basu Chakraborty, Manohari Singh, Maruti Rao Keer, Anil Mohile, Arun Paudwal and Meera Dev Burman. From 1944 till his last fim in 1974 he worked with so many assistants and yet delivered all supreme melodies. Also, like a consistent sportsman, he had delivered most successful spell in last phase of his career. This one is most beautiful and an under rated songs from one of his last films.

Sachin Dev Burman will always be Prince of Music for the grace and stature he gave to Hindi Film Music. His contribution in composing and sound designs shall remain path breaking for future musicians.