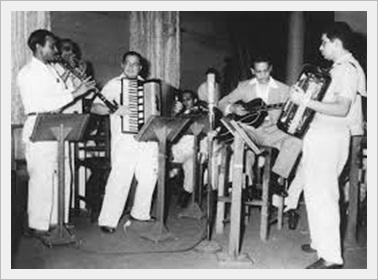 It was May 1869. Cyrill Demian, an organ and Piano maker in Austria was about to file a patent for his newly developed box type instrument. It could be carried anywhere and played. That was the need of time. Little did Cyrill and his two sons Karl and Guido realized that their newly patented instrument would bring a freshness to music of Hindi Cinema after 121 years.

Cut to the year 1950. Young and now Big Music Composer Naushad was looking for a new sound for songs of his upcoming film Dastan. It was being produced by A.R.Kaardar. He wanted an Accordionist who could play in his composition. There was a Parsee Drummer called Kawas Lord in his orchestra. He knew a guy who had his own band and also played Accordion in Parsi theatrical dramas. His name was Goody Sirwai. He brought him to studio and introduced him to Naushad and a new chapter in the hindi film music begun. For the first time Accordion was played in a hindi film song and that song was Ta Ra Ri Ta Ra Ri…

Over a Period of almost one and quarter century, Accordion had undergone many changes. It changed many forms and styles for playing. There were Button Accordion, Unisonoric and Bisonoric Accordion, Concertina, Bandoneon, Piano Accordion etc. Out of all these, Piano Accordion became popular in hindi films music. Primarily because it had a Piano style keyboard to play with few sound register called couplers that could change the pitch of sound as per requirement.

Even though Naushad introduced Accordion, it instantly caught attention of Shankar Jaikishan and they used it freely in their music. Songs, Title Music, Background Score everywhere Piano Accordion was used in every possible way. So, who were the players who played in all these songs and scores ? Well, there were few but expert musicians who could play it and played. They were Goodi Sirwai, Kersi Lord, Sumit Mitra, Dheeraj Dhanak, K. Bharat, Enoch Daniels, Sammy Reuben and Suraj Sathe. These were the names who enthralled music lovers with their outstanding Accordion Playing Skills in hindi songs over four decades.

So, lets have a close look at some of those Accordion songs that are still cherished today and see how various composers used it in different ways.

This was the first song when Goody Sirwai played Accordion in hindi films. Its been used in very controlled and distinct manner to play interlude and filler pieces.

By mid 50’s, Shankar Jaikishan were completely in love with the sound of Accordion. This song begins itself with Accordion and has its sound all over composition. Interludes, Bridges, Fillers everywhere. Its one of the finest example of use of Accordion.

Accordion also had its presence registered in almost all genre of music such as Rock n Roll, Jazz, Pop etc. Composer Ravi had cleverly used Accordion in his dance song as a harmony along with singing of Mohd Rafi. Also he used in interludes too.

Hemant Kumar also used Accordion very dominantly to play the interludes and main melody in this song. It was his arranger and an outstanding musician Enoch Daniel who played Accordion in this song.

While listening to the song, it feels that atleast two Accordions were used in the prelude of this song. Actually it was only one. Musician Kersi Lord brilliantly kept one note pressed with one finger and played entire piece with other fingers. How could he do it ? Only he knew but what we know is an immortal music that he created.

Accordion had little place in the overall sound design for a music of earthen and rural settings. Perhaps it was always identified more with club and urban styles. However Kalyanji Anandji did use it in their song of soil. They had to compose an interrupting music piece in the interlude of Mere Desh Ki Dharti to depict the city life of Bombay. They composed a brilliant music piece for Accordion and it fitted perfectly.

O.P.Nayyar also used Accordion in his own signature style. While most composers used it for dance and romantic songs, OPN used it for a pathos laden and philosophical song Chal Akela. A noteworthy point is that usually Accordion had not been played in tandem with other instrument in orchestra due to its own loud and unique timber of sound. However, OPN used it along with Flute and produced a unique sound.

If its RK Movie, Accordion had to be there in the music. RK and Accordion became synonyms for each other in hindi films. Laxmikant Pyarelal also kept the tradition alive when they took the reins of music for Bobby. It was their tribute to their Gurus Shankar Jaikishan. They used Accordion dominantly in this song and also blended the Bass Flute with Accordion in the Coda or Postlude music piece of the song. It was a unique sound for an everlasting melody.

Accordion has been used in many signature music pieces like RK anthem, background score of Anand (1971) etc in our films. It has left an ever lasting memory for all the music lovers. While remembering all those songs and music scores, its equally important to remember and pay respect to the Accordion players whose music skills had made those songs immortal.