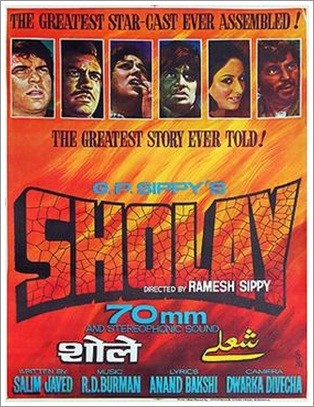 What could possibly be interesting in a 2:45 minutes title music ? Given that it has no lyrics , no singing and not much of an instrumental interplay , it is not surprising that it has not been much discussed and yet, it’s much loved, obsessed and cherished piece of music by all music lovers. Title track of Sholay is nothing less a milestone than the film itself.

Pancham‘s music can never be separated from its cinematic expressions. So does the title track of Sholay too. The music travels along with the characters on screen. In fact, the title music of Sholay actually serves purpose of background music too that supports the visuals. Hence, the story begins from the first frame of the film.

The track begins with Police Officer and Ramlal mounting on horses and music rolls with Rhythm Guitaring. Here comes first highlight. The track is composed in D major scale. So the Rhythm Strumming had to be in D major. The notes are D F# A. R.D.Burman‘s chief rhythm guitarist Bhanu Gupta added one more Suspended 4th Chord in strumming. Which is D G A notes along with D Major Chord. The result was amazing. Track starts with Rhythm Guitaring and Pick up on Bass Guitar with soft rhythm on Conga Drums to signify the beginning of long journey on horse.

As the title credits being rolling along with horse riders taking pace, Drums joins the rhythm and along with full Strings and Brass section now the music is catalyzing the pacing film credits.

While traveling the horse riders reach the village Ramghadh. So the music also has to take a twist and suit the visuals. R.D.Burman brilliantly broke the pacing rhythm with strokes on Tabla Tarang and extends it with his favourite Chapki beats (played on bass side of dholak by keeping it vertical) and Madol. Melody piece is played first on solo guitar, flute and Taar Shehnai and later Taar Shehnai is played in tandem with Flute.

When Riders leave the populated village and take last lag of their route to house of Thakur Baldev Singh, again original rhythm resumes with pick up on Bass Guitar and Conga. In the last lag, legendary musician Manohari Singh has whistled the tune of title track and then finally the strings conclude the track with counter points on Cello and the lastly few strums on Rhythm Guitars give way to Salim Javed to begin their immortal story of Jai and Veeru.

Title track of Sholay is like a music piece of Bach or Beethoven. Hundreads of musicians and bands have played it and excelled in replicating it but no one could so far re-create the same magic. That’s real tribute to Pancham.