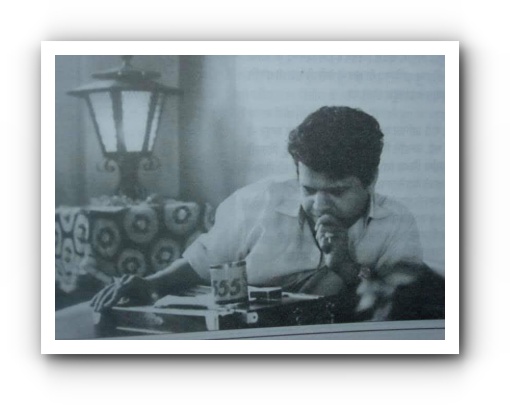 He was always a man of warmth. A prince in appearance and a king by heart. Dressed in shining Shark skin fabric trousers, crisp shirts and pointed shining leather shoes with his carefree strands of hair running around the forehead, whenever he entered the studio or a party, all the eyes always used to be on him. Jaikishan was really a charmer. His music has always reflected his persona.

Music comes from within. Its a sound of soul. That is the reason why every composer and artist could create his own unique music from only seven musical notes. Shankar – Jaikishan were never separate. Neither of them ever claimed for any particular tune being composed by either but their individual styles were completely different. Shankar, on one hand was a disciplinarian, non drinker and strict man Jaikishan was very social and party man. Both equally talented and had water tight grip over the grammar of music.

Its always a kind of discussion among SJ fans that which song was composed by whom as none of them ever disclosed about it in media. Music lovers can only guess by listening to the songs and rely upon few authentic accounts given by veteran artists of film industry who confirmed about few songs that were composed by Shankar or Jaikishan.

It is very interesting to have a deep dive into the musical repertoire of SJ and few indicative songs composed by Jaikishan and have a close look at their intricacies. Let’s attempt to have a look at few such songs –

Inspired from Gujarati folk song Morali Veran Thayi Kaanuda Tari , the beautiful composition begins with Toda of Bharatnaatyam and slides over to the song. Taking the Mridangam forward from the on stage dance to the song, it is flawlessly blended with Dholaks on the beats of Taal Dadra. Dominant use of Solo Harmonium across the song enhances the classical feel and honey dipped voice of Lata Mangeshkar adds to the sweetness. Needless to say that the versatile Hasrat Jaipuri has beautifully pour the devotion for Lord Krishna into his lyrics.

A Peppy Party Song that had all the elements to make listener jive. Even though this song had situation of club and party, the orchestration is surprisingly not too loud but soft and melodic. Solo Accordion bridges becomes the signature mark across the composition and Interludes with Piano pieces adds elegance to the celebration mood. Mohd. Rafi was at his peak of performance in the sixties and so he spells magic in this song too.

As shared by director of this film late Lekh Tandon ji, when the sitting for music of Professor was going on at the residence of Jaikishan ji, he pointed out that this song will not only be a hit but popular for decades to come. His words have turned out to be written on gold. Based on Raag Shivranjani and Taal Jhaptaal, this immortal composition exudes the emotions of love and pain at the same time. Saxophone pieces in interludes adds lovely twist to this otherwise classical mold composition.

Romantic Songs have a soothing impact to mind when the melody is not overpowered by orchestration. This composition is a testimony to this fact. As a mark of SJ brand, this song also has a heavy strings harmony in the background of vocals. However, their sound is suspended to a level where it does not interfere with the main melody. While the vocals are beautifully accompanied by Taal Khemta (Dadra) , the interludes are kept short and have almost suspended rhythm so as not to make the song louder. Lyrics by King of Romance Hasrat Jaipuri and soft voices of Mubarak Begum and Mohd Rafi are just icing on cake.

Based on Raag Sindhu Bhairavi and Taal Keherwa , this beautiful composition , though in a classical mold, exudes absolute romance. Use of Solo Sarangi is like a quintessential classical element in the song at the same time both the singers have refrain from taking Murki’s in most places. This has made the song beautifully simple and melodious.

If there could be a list of finest romantic songs written in Urdu-ish Hindi, this song would top the chart. Even though Arzoo had all the songs popular, this one deserves special mention due to its poetry by Hasrat Jaipuri and its delicate treatment by Jaikishan. Again, as mentioned earlier, this romance filled composition has almost suspended strings score in background with skillful use of Glockenspiel, Sitar and Swarmandal. Mohd. Rafi had delivered it in a way that signifies his status as an inimitable artist.

One of the finest romantic songs that has stood test of time. Its merit lies only in its melody as the orchestration is minimalistic. The romantic lyrics and rendition by Mohd.Rafi along with the ever lasting melody of the composer are the three vital elements that has made this song immortal.

Jaikishan was known for his Background Music composing. Pt. Haridaynath Mangeshkar has told in an interview that when other composers used to make 35 to 40 music pieces in a day for any film’s background music, Jaikishan easily composed 55-60 pieces a day. It was a delight watching him composing background scores. This song Aawara Hoon was re-recorded for background music of Mera Naam Joker. Interesting part is the change of arrangement. Rhythm on Dholak of original song was replaced by pacey 2/4 beats on Bongos, much louder sound of Piccolo flute and use of Brass makes it more vibrant and relevant with 70’s style.

Jaikishan was popular and loved by his peers and fans. His style and Persona have become legend in film industry. However, his real strength was his music. His grip over nuances of classical music and making it simple and consumable to common listeners was his greatest skill for which music lovers will always remember him.