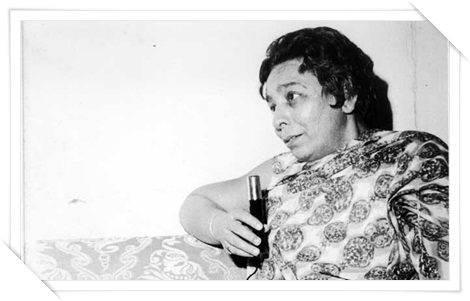 Na Kahu Sang Dosti, Na Kahu Sang Bair.... as Kabir said was the motto she followed all her life. Otherwise how could it happen that a singer who worked with the top composers of 30’s and 40’s like Pt. Amarnath, Ghulam Haidar, Husnalal Bhagatram, Naushad, S.D.Burman etc and who was a top playback singer of her time, stayed almost out of limelight in her career. Had Shamshad Begum followed the practices of profession in film industry, perhaps the titles and equations of playback singing would have been written differently than they are today.

Legendary music director Naushad once remarked that in Punjabi culture, singers were trained in open voice and high pitch. Perhaps that was the reason singers like Zohrabai Ambalewali and Shamshad Begum had such buland awaaz or open throat. This open throat singing paved way for high scale playback singing which Mangeshkar Sisters popularized. Even Mohammad Rafi also was from the same school of singing.

Story of Shamshad Begum getting into singing was no different than any other conservative muslim household in pre-independence era. It was her uncle who encouraged her to pursue singing knowing her gifted talent. Her singing skills were honed by Master Ghulam Haider who took her first audition in Lahore based music company Jenaphone. Shamshad Begum remained grateful to him all her life. However the real credit of getting her to Bombay and sing for hindi films goes to Mehboob Khan. He convinced her father to come to Bombay and sing for his film Taqdeer (1943). One can imagine how loving her father would be to send his daughter to sing for films from Lahore to Bombay in 1942-43.

While Shamshad Begum did playback with almost all top male playback singers of her time such as G.M.Durrani, Khan Mastana, Talat Mehmood etc., she also sang with then newcomers like Mukesh, Kishore Kumar, Rafi and Lata Mangeshkar. When C. Ramchandra composed first westernized song of Hindi Film Music, Aana Meri Jaan Sunday ke Sunday for the film Albela (1951), it was Shamshad Begum who had the privilege this duet with Anna himself.

As it is said, every rising sun sets , career of Shamshad Begum also slowly too a down turn after sudden passing of her husband in 1955. She could not perhaps came out of that shock and slowly drifted away of her active career in films. However , she did continue singing till mid 70’s but not regularly. Her association with O.P.Nayyar gave some brilliant songs to films and OP kept using her voice through out his career.

C.Ramchandra or Anna as he was fondly known, had supremely tuned this duet which still sounds fresh with lovely arrangement on Piano, Strings and wood wind instruments.

During the recording of this famous song, Talat Mehmood was nervous as he was a new singer and Shamshad was top playback singer and Naushad was very big composer. Shamshad Begum had encouraged him to do his best and the song was recorded in first take.

S.D.Burman is known for his lilting and hummable melodies. He also composed such a lovely song solo with Shamshad Begum. Its arrangement of Strings, wood wind and Accordion is another highlight of the song.

A soft and lilting melody composed by Chitragupt. With soft strings and wood wind arrangement and melody enriched with long notes, perfectly designed for high caliber singers like Rafi and Shamshad Begum only.

O.P.Nayyar’s one of those songs that got hit on its merits of melody. With simple arrangement and all same interludes, its the melody and Shamshad Begum’s skillful singing that just keep listener hooked to it.

Having listened to this beautiful duet, listeners always would yearn that it would have been great if Shamshad Begum and Kishore Kumar had sung more duets. O.P.Nayyar’s one of finest. Taal Dadra in antara’s is another delight to ears.

Another Shamshad – Lata duet with beautiful Shayari penned by Shaqeel Badayuni and composed by Naushad. One of the finest qawwali’s of hindi film music of all time.

Shamshad Begum remained almost in anonymity during her life except few interviews that she gave. Her singing , in many ways, had become stepping stone for playback singers of coming decades. She quietly passed on in 2013 in Mumbai at the age of 94. Her name will always be taken with utmost respect among pioneers of playback singing in film industry.

(Quotes and Excerpts from Shamshad Begum’s Interview with Gajendra Khanna on shamshadbegum.com ; Quote of Naushad taken from his interview on youtube – https://youtu.be/lM1Io4Usqv0)