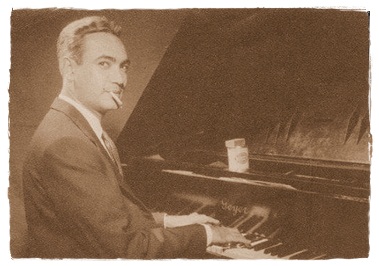 I remember we used to have four hour shift and then over time but he never used to take more than two and half to three hours for recording. Three hours and song is packed up. One day I asked him, “Nayyar Saab, You never have second take. If you do more takes you can have better song recording” He replied “Yes I can have but the freshness which I get in first take will be lost” Recalled Musician and Arranger Kersi Lord about the composer of stubborn will power and delicate heart ‘O.P.Nayyar’. OP as he is fondly remembered, was truly an unconventional composer. He was man of his own rules, artist Par Excellence, connoisseur of sophistication and compassionate human by heart.

On one hand he was so stubborn on his rules that many great artists and musicians had to go back from his recording because they reached late. On the other hand he could never see musicians in misery. He started the system of on the spot payment to musicians once recording is finished because he saw musicians chasing and begging for their payment from producers and music directors. There are many stories of his colorful personalities but the most important matter was he remained commercially successful music director for almost two decades without using voice of Lata Mangeshkar. This was indeed an achievement in itself.

Hindi Film Industry had always a system of working as an assistant of established Music Directors for a new comer who wanted to become one. O.P.Nayyar was the only one who never assisted any Music Director.

He did have a troubled childhood and that reflected in his rebellious nature too. Perhaps that was the reason he never followed the conventional practices of music making or stayed firm on his words all his life. This non conformity resulted in many musical innovations that he did. In this article, lets focus on variety of his musical repertoire.

Faith in the Strength of Melody

OPN had unwavering faith in the power of his tunes. When the system and style of harmonic arrangement with large orchestra was becoming popular, he composed some songs which neither had much variety of instruments nor different interlude tunes. Still these songs became popular and cherished even today. Lets enjoy two such songs :

Mid 50’s when the music arrangement was being influenced heavily by Jazz and Blues with strings harmonies, O.P.Nayyar composed this song with just Harmoniums, Clarinets and Flute for Interludes and Dholak for Rhythm. Rest of the magic was done by Shamshad Begum and Rafi’s renditions. The strength of the song was its melody, the tune. Its vibes are still cherished by music lovers.

Cut to 1969. OP’s conviction for his tunes never faded out. He composed a song of pathos and plea on the lyrics written by Kavi pradeep. The arrangement had dominant Piano, Vibraphone and short Violins obbligatos. He used solo violin in the harmony in the background of vocals and just simple Tabla for rhythm. Shahnai pieces for bridges adds to the somber mood. Simplicity with elegance.

There is no second thought about how the Music Directors of our Hindi Films have evolved the sound of instruments over decades by blending two or more instruments of same as well as different families. Either it is Clarinet with Flute or using two Clarinets together on different frequencies or Accordion with Transicord etc. Still the charm of solo or single instrument in songs has never faded away. O.P. Nayyar has always used solo instruments very dominantly in his songs. His skilled use of solo instruments has enhanced the grace of sound. Lets take few songs for example.

Bridges are the melodic passages played on instruments in the gap of vocals. These bridges are very important as a well crafted small three notes or five notes bridge can enhance the melody to great extent. O.P.Nayyar had composed these bridges on Solo instruments brilliantly in this song. In the first antara Mere Dil ko Tum Bha Gaye……he used Rubaab for the bridges. In the second antara Mohabbat Jo Karte Hain Wo……..a single violin is used for bridge. Its fluid and sweet sound intensifies the romance of the lyrics. Again Rubaab is used in third antara Mana ke Jane Janah……. This composition shows how a composer brings out the feel from the lyrics with the use of optimum instrumentation.

If a tune of Interlude is catchy enough to enhance the sweetness of song, its repeated use in same song also does not matter. O.P.Nayyar and Shankar Jaikishan both proved this logic successfully in multiple songs. This song is also another example of OP’s brilliant music sense. Almost all instruments in it are used solo. Right from Lead Electric Guitar which plays the prelude and interlude tunes, Accordion which is used only once in Mukhada and Flute which is used for fillers in both Antara’s. However, the most important is the use of solo Violin in the interlude as harmony alongwith Guitar. Continual flowing sound of Violin complements the Staccato (single) notes of Guitar. A classic and proven sound design.

Music Lovers unanimously agree today about contribution of O.P.Nayyar in shaping the career of many playback singers. Especially Mohd Rafi, Asha Bhosle and Mahendra Kapoor. Lets look at some examples of them.

Mohd Rafi has been one of the greatest singers of the Hindi Films of last eight decades. His range and repertoire are unparalleled. When he began his career in mid 40’s, he had his contemporaries and peers like G.M.Durrani, Khan Mastana and legendary K.L.Saigal. They were the very successful actor and singers. It was very natural that the new comers like Rafi, Kishore Kumar and Mukesh initially followed the trail of these singers which was style of Thehraav or little serious singing. Eventually everyone evolved with their own style. O.P.Nayyar can be very safely credited with bringing him out of serious singing to playful style. He gave him songs like Jane Kahan Mera Jigar Gaya Ji and Ae Ji Dil pe Hua Aisa Jaadu which were of frolic and enthusiasm. Mohd Rafi very well evolved this style with his natural supreme singing.

There would be hardly any music lover who does not acknowledge the contribution of O.P.Nayyar in the career of Asha Bhosle. He gave all kind of songs to her such as intensely romantic, sad, playful and dance songs which helped her to show her versatility as a lead playback singer. Similarly, O.P.Nayyar gave Mahendra Kapoor also the songs which he would have offered to Rafi. Songs which Mahendra Kapoor sang for him reflects a different and softer timber of his voice. This tone was different than he normally sang for other composers. Certainly, O.P.Nayyar knew what he wanted from his singers and what they could deliver. This song Haath Aaya Hai Jabse is a testimony of his caliber to get best from both Asha Bhosle and Mahendra Kapoor.

In his multiple interviews, O.P.Nayyar has candidly shared that he never received any formal training in music. However, He did compose songs which were based on Indian Classical Music and were brilliant compositions as well. Lets look at two such songs.

Based on Raag Pilu and Taal Dadra, this song is definitely a lovely expression of longing and love. Another highlight of this composition is that even though its melodic roots are in classical music, OPN used waltz in the interludes. Waltz is a western rhythm which is closest to Dadra in signature hence both can go hand in hand. Having used Waltz, he refrained from making the song classical and rather made it a soft romantic melody.

This song itself is a unique composition because both the singer and composer had no background of classical music and yet they delivered a gem like this. It is based on Raag Yaman Kalyan and Taal Jhaptaal. Another genius about OPN was that he composed this song in Ten Beats Taal. Jhaptaal is having a cycle of ten beats and once full cycle or aavartan of ten beats is complete, then only there could be change of line in the melody. This is because the next line of song has to begin on the Sam or First beat of cycle. Inspite of having no knowledge of classical music, he could compose such song, was really his gifted talent.

O.P.Nayyar was a phenomenal music director and his work has stood the taste of time. It is as fresh as it was when composed. He made music on his own rules and never compromised. He will remain inspirational for composers and music lovers of generations to come.